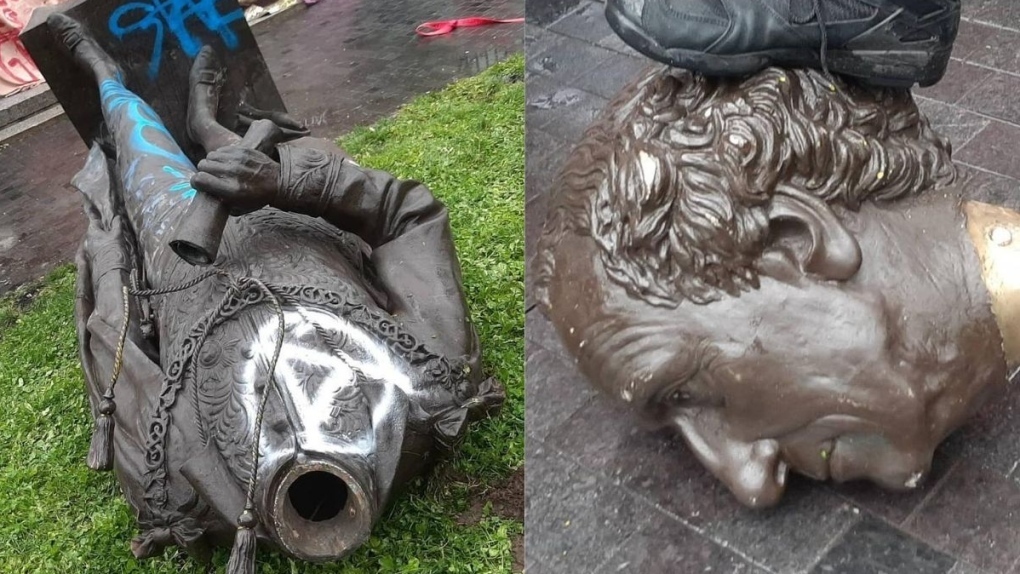 Last week, demonstrators in Montreal toppled a statue of Sir John A. Macdonald. The force with which the statue hit the ground severed the head from the rest of the piece thereby destroying it. An anonymous letter from those claiming to be responsible said that that this action was taken because the city council had not responded to the group’s previous demands to have the statue removed. This action is part of a trend where activists think that they are righting great historic wrongs by removing symbols that they believe glorify those wrongs. A historian might suggest that the activists are misguided and short sighted in their approach and that erasing history does not change it, and by not remembering it we are doomed to repeat it. They might also say that, understood in their proper context, statues can help to tell complicated and often uncomfortable stories about our past; stories that we can learn from.

That’s the funny thing about symbols; they can mean different things to different people because we are the ones that assign the meaning. We choose what memories will be attached to a statue or other memorials. If we attach meaning that comes through understanding the context, then the symbol tells a much fuller story.

The Passover is a highly symbolic event in the collective life of the Jewish people. It tells the story of how one terrifying event lead to the freedom of God’s people. When we recall this story we normally focus on God’s greatness and concern for his people. We overlook how this would have been received by those on the other side; an act of terror perpetuated against them. However, the whole context is set in the story that has been passed down to us if we chose to find it there, and what that context tells us is that the freedom of God’s people came at a great cost. God never wanted his people to lose sight of this fact.

This day shall be a day of remembrance for you. You shall celebrate it as a festival to the Lord; throughout your generations you shall observe it as a perpetual ordinance.

In order to ensure that the story would always tell the whole story, God made provision for an annual commemoration where, like it or not, people would not only retell the story but would participate in it. This would serve to connect them to their past and to immerse them in the context so that they would remember both the greatness of God and the price of their freedom. There is great humility in this as it helps us to find our place in the universe, somewhere between lofty and lowly.

Toppling statues does not set us free from our past. It disconnects us and makes us vulnerable to repeating it. Perhaps our goal should be like that of the ordinance of The Passover; to recall the context and enter the story so that we can be connected to the good, the bad, and the ugly that makes up our history. We are the result of our history. Neither glorifying parts of it or disconnecting ourselves from it serve to help us understand who we are and why we behave the way we do. We need more perpetual ordinances. We need more statues so that the whole story is told and together we can find our place somewhere between lofty and lowly.